Since the increased popularity of action cameras, the number of  options to choose from has increased, so finding the best action camera for you seem a little difficult.

We chose our top three models which we feel are the best in what they do. The question is always what are you the consumer looking to get out of it. The three models GoPro Hero8 Black, DJI Osmo Action and the Insta360 One R are great cameras all doing thing a bit differently.

The new GoPro HERO8 Black is a Waterproof actrion camera with 4K and  Hypersmooth Stabilisation, Touch Screen and Voice Control.

With so many great action cameras to choose from I am just including a brief over view of my top three action camera picks.

GoPro has out did themselves with this one, creating a excelent action camera in the frameless GoPro HERO8 Black. Building upon the recently crowned T3 Award-winner HERO7 Black, the Hero 8 also has HyperSmooth 2.0 and TimeWarp 2.0, as well as enhanced functionality.

There are lots of simple-to-use presets for enhanced levels of action photography, regardless if you are a beginner or are more experienced. Available is a new system of GoPro accessories for the Hero8 Black called GoPro Mods.

The cool thing about GoPro Hero8’s new camera is that it has a frameless design fitted with two ‘folding fingers’ at the base. These magnetic fingers fold in flat when not in use, but conveniently pop out when neccessary to mount the camera.

One big draw back to me is there is no integrated front-facing display like you’d find on the DJI Osmo Action, but theGoPro Max is equipped with one. That isn’t to say you can’t have a front-facing display if required on the Hero8 Black, you canwith the new Display Mod. This essentially adds a front- or rear-facing flip-up display to the Hero8 action camera.

The Hero8 action camera also features four digital lenses, making it simple to select the ideal field of view for whatever you’re shooting. The choices are SuperView, Wide, Narrow and Linear. This helps you get thge right shot for the environment you are in. The audio has been improved compared to past GoPro models, with enhanced wind suppression on the front-facing mic. Where better audio quality is required, the new Media Mod will boost the Hero8 Black’s audio further by delivering shotgun-mic directional audio performance.

There are all-new capture presets, which GoPro has developed so that you can select the right setting for whatever activity you are filming. A redesigned SuperPhoto feature offers up ghost-free HDR action photos, and all-new LiveBurst captures 1.5 seconds of 12MP (4K 4:3) footage before and after the shutter.

The top Drone builder, DJI has spent the over ten years perfecting and dominating the arena of aerial shooters, developing class-leasing image stabilisation tech and intuitive flight control. Now it has expanded that camera technology into making its first action camera.

The DJI Osmo Action is marginally bigger and heavier than the older model Hero7 Black, but that’s acceptable considering how it is equipped with a colour front-facing screen in addition to a 2.25-inch touchscreen at the rear.

Equivalent to the GoPro, the Osmo Action offers a range of control options, inclusive of voice activation. There is an added benefit of two built-in microphones, but we would recommend adding an external microphone to to get the best audio experience.

As you wil see the Osmo Action, in terms of spec there is little separating it from the Hero7 Black but not quite the Hero8 Black. Considering the pretty even match, the DJI is more cost-effective and offers that front-facing screen, which is better for vloggers or any situation where you want the camera recording yourself and need to see how you’re framed.

Insta360 has plenty of experience making incredible 360-degree cameras, but the Insta360 One R is its first stroll into the action camera market. The One R’s top feature is that it is a totally modular system, in which the camera comes as four separate modules:

The most confusing thing is when you wnat to start shooting you have to decide whether you want to record conventional or 360-degree content, select the relevant lens, then clip the modules together. The system assembles really well and enables you to add additional parts and upgrade or replace as required.

The quality of the One R’s 360-degree video is excellent and only really falls short of what the GoPro Max can achieve due its more obvious stitching errors. Like the GoPro and DJI Osmo the Insta360 One R can record conventional video in 4K, albeit at a 4:3 ratio at 30fps, which beats the GoPro Max’s highest conventional resolution of 1440P at 60fps. If you’re looking for the most versatile action camera system available, the Insta360 One R is for you. 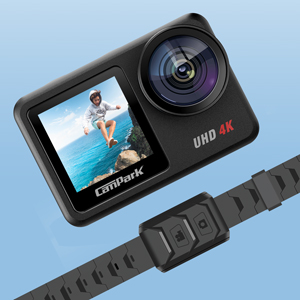